California, Unruh and the National Consequences to Web Accessibility

A history of non-discriminatory laws

California has stood at the forefront of promoting accessibility for people with disabilities more than any other state in the nation. In fact, its push to equal the playing field and remove discriminatory barriers began over 124 years ago in 1897.

California’s 1897 Equal Rights Statute stipulated: “[A]II citizens within the jurisdiction of this civil state shall be entitled to the full and equal accommodations, advantages, facilities, and privileges of inns, restaurants, hotels, eating-houses, barbershops, bath-houses, theaters, skating rinks, and all other places of public accommodation or amusement, subject only to the conditions and limitations established by law and applicable alike to all citizens.”1

In the same year, the famous case of Anderson V. Fisher put that legislation to the test.

Edward W. Anderson and his spouse, Mary, were barred from entering the Fisher Opera House despite purchasing tickets in advance. The theater manager, John C. Fisher, explained the decision to be racially motivated: “I do not allow colored people on that floor.”

Anderson prevailed in court, and despite a reversal decision to decrease the pay in damages by a higher court (from $150 to $9.25), his case set a legal precedent in the Bear Flag State.

In 1959, California expanded its non-discrimination legislation with the Unruh Civil Rights Act, signed into law by Jesse M. Unruh.

The law states: “All persons within the jurisdiction of this state are free and equal, and no matter what their sex, race, color, religion, ancestry, national origin, disability, medical condition, genetic information, marital status, sexual orientation, citizenship, primary language, or immigration status are entitled to the full and equal accommodations, advantages, facilities, privileges, or services in all business establishments of every kind whatsoever.”

When the Americans with Disabilities Act (ADA) was enacted into federal law in 1990, California incorporated it into its laws, prohibiting the discrimination of persons with disabilities as well.

California passed legislation compelling all state agencies and entities to make their websites accessible to people with impairments in 2019. It also codified into law the standards by which to comply with—WCAG 2.0 Level AA.

The private sector, meanwhile, remained under the radar for the most part.

Drawing its disability laws from the ADA, the Unruh Act in effect became a significant driver in California’s Web accessibility lawsuits. Any ADA violation is also considered an Unruh violation, and since plaintiffs’ attorneys’ fees are higher at the federal level, the incentive to file lawsuits at the state level became greater.

But that’s not all. A recent California court ruling from 2020 may have major consequences for out-of-state businesses as well.

In August 2020, plaintiffs Cheryl Thurston and Luis Licea filed suit against an out-of-state company, named Fairfield Collectibles, after the two California residents were unable to navigate the website in accordance with WCAG 2.0 standards that apply to the blind and visually impaired.

Initially, the court ruled that the Unruh Act does not cover businesses outside of California, as Fairfield did not direct its activity specifically to the state.

Despite not having any specifically directed business in California (such as marketing), any offices, or employees in the state, Fairfield lost the case and had to comply with website accessibility rules.

California is the world’s 5th largest economy, and most businesses cannot afford to withdraw their sales from the western American state. So should you comply with the Unruh Act to mitigate litigation?

While opinions differ on this matter, as the full consequences of the Thurston v. Fairfield file have yet to unfold, we would definitely recommend doing so, and pronto.

If you don’t know where to begin on your journey toward accessibility, EqualWeb is here to offer you a one-stop-shop solution for all your accessibility needs. To learn more about our product and services, click here.

Find out your accessibility score 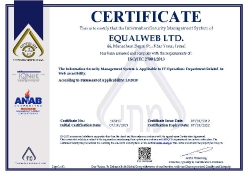 Our mission is to make the digital world accessible to everyone.